If one is lucky enough to look at a Leonardo da Vinci painting for a long time or over an extended period of years, one is struck by how alive everything in his paintings is, from the landscapes, buildings, plant life, individuals, animals and sometimes even corpses. He mastered the art of motion in his works, something no artist previously had ever done, and in my opinion, which no artist has been able to master in the same way.

Mr. da Vinci was an astute observer of nature, an artist and scientist who did numerous autopsies on human beings, animals, and plant life. The universe was an ever-expanding and living creation, not a static invention. In each of his works, the smallest details such as a tree branch, a small stream passing over rocks, or a dog in the background, all seemed to be in motion. Even if the dog simply was lying down at his master’s feet, the observer could see the dog’s muscles moving with each breath that the animal took.

It was roughly five years ago that my wife and I moved to a small, picturesque town in Kentucky. After living nearly half-a-century in New York City and Los Angeles, one could say that it was quite a change.

The homes, unlike the homes in those cosmopolitan landmarks, are quite a distance from each other with large front and back yards (in many cases the size of football fields). Plant life is plentiful. Animal life is varied and bountiful. And yes, at that perfect time of the morning, the dew on the grass truly makes it appear blue. 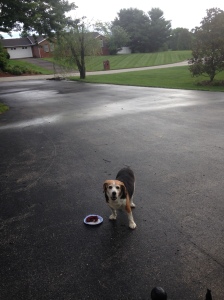 To say the weather is erratic is the kindest of compliments, but the metrological randomness is offset by the never-ending kindness of the warm and friendly people who live here.

For probably the first time in my life, I can play music as loudly as I want without disturbing any neighbors.

The town is quite hilly and for a runner, like I used to be once upon a time, it is challenging, very challenging. It would be the perfect place to train for a marathon.

The one constant in this lovely little town, where the weather is erratic and plant life plentiful, is the ever-watchful gaze of a beagle named Louie.

For the record, I have an affinity for beagles, since one of my favorite literary characters is a beagle, Snoopy aka Joe Cool, in the Peanuts cartoons and movies.

Louie, playfully nicknamed the ‘council dog’ by my wife and I, has wandered the streets of our community since the day we arrived. If the legend is to believed, Louie may have patrolled his domain many years before we were ever born.

Louie would stop at a house…or two…or three…to receive treats from generous neighbors and continue on his way until he came to a rest at his favorite buddy’s house, Bruce.

Bruce is one of those Kentuckians I have described as a Teddy Roosevelt Democrat. He is on the move, doing chores and work around his house and church from the moment he rises in the morning until two hours after he has gone to sleep.

Louie, always vigilant and protective of his friend, always could be seen by Bruce’s side supervising nearly every move, occasionally taking a break to eat, stroll the neighborhood, and take a well-deserved nap in the sun on Bruce’s front lawn.

Rumor has it that despite Louie’s ample size (occasionally being mistaken for a basset hound), Bruce would load Louie into a wheelbarrow for a stroll around the yard.

The wheelbarrow incident remains unconfirmed, but there are several eyewitness reports of Louie’s dad driving the LFD (low-flying dog) to Bruce’s before heading out to work. Loading Louie into and out of the truck took a bit of work, but nothing was too good for the council dog.

I am told that supervising, as my two cats, Bogey and Bette, are quick to remind me, is quite a stressful job.

Louie and I bonded one cold and snowy night when, like an idiot, I decided to go for a run.

After sliding one too many times along the slick streets in my summertime shorts, I gave up and decided to walk back home.

Turning into my driveway, I noticed Louie walking beside me. Apparently, he was on his last tour of duty that night before going back home to his father, Rackle, and his mom.

He studied me carefully, with those big brown puppy eyes, and I couldn’t help knowing he was thinking, “My God, I have met some stupid humans but this one takes the cake.”

I opened the garage door and Louie followed me in. I could hear him thinking, “Might as well check this out. This level of stupid deserves a closer look.”

I walked to the back of my very large garage and opened a refrigerator and took out an ice-cold beer (After all, what goes better after a run on a cold, snowy night than an ice-cold Budweiser).

I also took out a packet of hot dogs and a leftover steak for Louie. It seemed appropriate, as it was not very often that I got a visit from such a distinguished guest.

We walked back to the front of the garage and looked out at the falling snow. Louie ate the steak and hot dog after hot dog while I drank my beer. I told him the story of my life. He was unimpressed to say the least.

After one last stroll around the garage, he bade me farewell as I watched him walk back to his home, his tail flapping in the wind as it swatted off snowflake after snowflake.

Louie and I became fast friends and, I have to admit, I felt honored. As time went on and the weather got nicer, he would be the first one to greet me when I went out for my early morning run, just as the sun was coming up over our lovely community.

After I was finished, he would follow me into the garage where I graciously would offer him breakfast.

Naturally, he would never refuse. It would be insulting, and being a southern gentleman, he was not one to insult.

On one particularly hot summer day, I watched as two other neighborhood dogs got into a heated argument.

Barking and roaring at each other, I was quite certain it would soon turn into an all out paw-on-paw brawl.

Suddenly I noticed Louie walking toward them, cool as a cucumber. I stood to intervene, but there was no need.

It suddenly got very quiet as Louie walked between the two warriors, flapping an ear at one, and then at the other.

Just like that, the combatants walked off in different directions and Louie continued on his way to Bruce’s house.

It was a moment unlike any other moment. In fact, it was a Fonzarelli-type moment.

For those unfamiliar with the term Fonzarelli, or “The Fonz,” please get your heads out of Facebook and go turn on the classic TV show “Happy Days” and learn something useful.

During the last five years, I have looked out my dining room window and watched Bruce and Louie hang out, play, work, and supervise.

In fact, there have been very few days in which I have not seen them together at least once.

The scene always has brought a smile to my face. In the back of my head I hear Jimmy Durante singing, “Smile, what’s the use of crying. Smile even though your heart is aching. Smile through your fear and sorrows and maybe tomorrow you will see the sun come shining through for you.”

Recently, I have not seen Louie across at Bruce’s. At first I thought he went on vacation with his parents.

But as time went on and I didn’t see him, I suspected the worst.

It turned out to be just that…the worst. Our treasured Louie had passed away at the home of his beloved parents.

Today, as I look across at the landscape of our community, I need to close my eyes and like a da Vinci painting, visualize the wagging tail of a beagle surveying and patrolling the area.

Louie leaves behind a mother and father, Bruce and his wife, and a grateful community.

His puppy dog eyes, his sweet demeanor and his protectiveness of all of us will never be forgotten. His spirit lives on in every mind, every heart, every plant, and every leaf that blows in the wind.

Yes, the universe is ever expanding and always in motion, and so is Louie. We grieve his loss. We rejoice our time with him. We cherish the memories and hold them tightly.

Our lives are better for his friendship, and we know that he still strolls up and down our street to protect and comfort us, even though we cannot always see him…except on those mornings, at that perfect time of the morning, when the dew on the grass truly makes it appear blue. There will be a glimpse of Louie, tail wagging, to smile “good morning.”