Published in 1967, pre Watergate and Trump, Gore Vidal’s “Washington, D.C.” must of caused a great 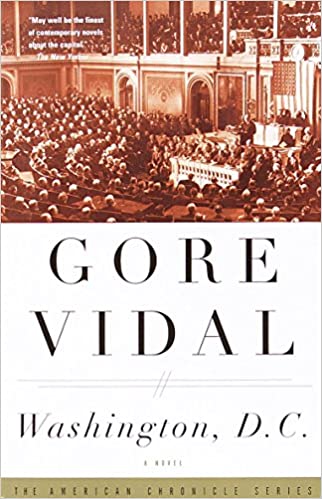 stir, but who better than this great writer to cause a stir and foresee the future. The American public has always had a mistrust of its politicians…. Mark Twain has more quotes on their corruption and stupidity that he could have easily come out with a sizable book on simply his political quotes.

But, before this novel was published the American public’s mistrust was simply that, mistrust. The level of corruption and at the highest levels of our government might have been discussed within the Washington social circle and in New York, but the public as a whole had very little knowledge.

Mr. Vidal’s novel takes place during the FDR, Truman, and the Eisenhower administrations, and the names of prominent politicians, Secretary of States, and Military Generals are mentioned quite abundantly throughout the novel. The fictional characters, Senators Day and Clay, and the publishing tycoon Mr. Blaise Sanford, are fictional in the sense that Mr. Vidal does not use their real names, but anyone with a passing knowledge of political history would have little trouble figuring out who he is talking about. It is these characters who make up a big part of the story, but it is the wives, the hookers, the media, the alcoholics, and the parties constantly being thrown that gives this novel so much energy and so much brilliance. In the hands of a less talented writer, this novel, might seem obsolete considering the circus currently going in Washington and the growth of the media, but in the hands of Mr. Vidal it is a classic without a shelf life. I loved this book and highly recommend it.