It is kind of ironic that in one of the most painful weeks I have experienced as an American, that I would choose to read Michelle Obama’s wonderful, inspiring, biography “BECOMING.” In a week in which our military has been debased and used as pawns, as one indictment after another indictment has been handed down against our President and his cohorts of criminals and as one man’s ego and greed has triumphed over everything America stands for and has fought for over nearly a century it is refreshing to know that we as a country and people will triumph over this dark period and, if nothing else, Mrs. Obama book is reason to be hopeful.

“Becoming” is so much more than a biography. In many respects it is a sociological study of communities throughout the United States and the world through the eyes of the author. The story begins in the small, childhood apartment of the author where we are introduced to an array of fascinating characters, aunts and uncles, friends, a sibling and her parents… No individual more fascinating than Mrs Obama’s father, Fraser Robinson, who worked for over twenty years for the city of Chicago, tending boilers and never missing a day of work despite living with the devastating disease of MS.
Michelle and her brother, Craig, are raised by parents who believe that an education is the way to advance in the world and that, in no small part, explains how a girl from the South Side of Chicago would go on to graduate Princeton and Harvard Law School and work for a high-powered law firm where she would meet her future husband, President Obama.
The couple tosses aside a comfortable life and decide instead to take jobs, at one-third the earnings, in community outreach programs that further the development and help create a better environment for children and adults in poverty stricken areas of Chicago, and so begins both their lives of public service and eventually the gift of living for two terms in the White House where their unselfish and caring personalities are put on display for the nation to witness.
I strongly recommend this book. It is far less about politics and so much more about giving hope to women, minorities, and the disadvantaged. It is a classic example that an education should not be deprived to anyone who desires one, and once exposed to the world of learning that nothing is impossible. It is also a reminder that one should not criticize anyone unless you have walked in their shoes. 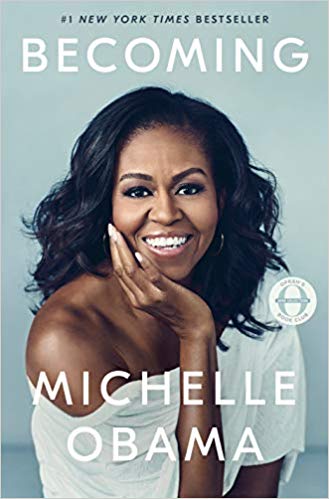